When nineteen-year-old huntress Feyre kills a wolf in the woods, a beast-like creature arrives to demand retribution for it. Dragged to a treacherous magical land she only knows about from legends, Feyre discovers that her captor is not an animal, but Tamlin—one of the lethal, immortal faeries who once ruled their world.

As she dwells on his estate, her feelings for Tamlin transform from icy hostility into a fiery passion that burns through every lie and warning she’s been told about the beautiful, dangerous world of the Fae. But an ancient, wicked shadow grows over the faerie lands, and Feyre must find a way to stop it… or doom Tamlin—and his world—forever.

Perfect for fans of Kristin Cashore and George R. R. Martin, this first book in a sexy and action-packed new series is impossible to put down!

You asked and now you’re getting it. After writing my thesis on ACOTAR/ACOMAF and being asked countless times if I hated or loved the book, here’s my re-done review. Think of this as the cliff notes version of my 60-page thesis (but this is also still pretty long)

Do I hate the book? I don’t hate it. I absolutely hate certain aspects of it, which I’ll dive into here, but as a whole I don’t hate it. I think SJM put some work into this book, and that alone gives me reason to respect it, because I could not have written something like this. That being said, let’s rip this thing up. This is not a spoiler free review.

As most of us know, this is supposed to be a re-imagined tale of Beauty and the Beast. Let’s already pause there. I don’t see this as re-imagined. If you know anything about the original Beauty and the Beast, which I do so buckle up, it’s a tale that is not all that different from this. It was written by a French woman named Gabrielle-Suzanne de Villeneuve back in the 1700’s and features a girl, Beauty, who has really awful sisters, a merchant father, a dead mom, and a Beast. Her father brings Beauty a rose, plucked from the Beast’s garden after a business trip and the Beast gets really mad about it, storms over to their house and demands to take Beauty back to his castle. He visits her in some dreams she has, she talks to lot’s of forest animals, and eventually they get married and break the spell, living happily ever after.

In ACOTAR, Feyre kills a faerie/wolf, Tamlin runs over to her house, pissed off, he says she can either die or he will take her back to his place, and she chooses to go live with him. Her sisters are awful, her mom is dead, her dad used to be a merchant…you kind of see where this is going. Eventually, Feyre falls in love with Tamlin, (though God knows why) a High Lord faerie, but in order to break the spell, she has to go through a series of trials Under the Mountain to free him and all of the faerie lands (Prythian) from their curse. She does, she dies, is brought back to life as a faerie, and there’s some other important stuff like a fellow named Rhysand who makes appearances and is generally super creepy and weird (again, I’ll dive into this later).

Feyre: She’s…human. And you’re reminded of this fact nearly every other page. And when it’s not being mentioned that she’s human, then she’s being described as female. She can hunt and paint, but not much else. She’s illiterate, she’s white af, and for some reason falls for controlling and dominating assholes like Tamlin. She’s kind of boring and becomes a High Fae in the end. She’s straight too.

Tamlin: He’s faerie. He’s male. He’s sexy (I guess), he’s WHITE. Excuse me, “tan-skinned” (like I said, WHITE). He’s an asshole. He bit Feyre once and yells at her a lot. He forces her to eat food when she doesn’t want to, uses magic to put her to sleep when they’re crossing in and out of his lands, uses magic to literally bind her to a chair/table until she eats, uses magic to manipulate her surroundings, hides things (like an entire castle of servants) and information from her, and is extremely passive while she is going through the trials Under the Mountain. He never moves, never helps her, never does anything. When he has a chance to be alone with her and make a difference, does he take advantage of this opportunity?? NO!!!! He makes out with her for awhile until Rhysand finds them. Also straight.

Rhysand: SIGH. I can’t tell you how much trouble this WHITE stupid batty-mcbatface has caused me. He’s creepy. He marks Feyre’s arm with a tattoo, which has an eyeball in the palm that WATCHES HER, when he creates a bond with her where he can low-key read her thoughts. He drugs her with faerie wine and forces her to dance for him in front of tons of other people (not just once, but for many nights). He paints her entire body and puts her in outfits that make her feel physically ill so that if anyone else touches her he’ll know (you have eyes dude. Use that instead). He also has to be Amarantha’s whore for some reason, because I guess that makes him complicated?? I’m not even sure.  ALSO STRAIGHT.

Amarantha: Queen bitch. Literally. Also WHITE AF (are you sensing a theme here?). She’s the one who put the curse on Prythian and generally makes life a living hell for everyone. Specifically targeted the Summer Court (information we’ve gathered from Alis) when they tried to overthrow her. She tells Feyre achingly obvious riddles and doesn’t play fair. She dies in the end thankfully. *takes a shot* Also straight.

Alis: From the Summer Court. She’s NOT white (Woah! Throwing a curveball here I know, but stick with me). She was one of the higher faes in her court, but had to run away after Amarantha killed her family and is now protecting her nephews. She asked Tamlin for work in his court and he put her in the position of a lady’s maid/kitchen maid. Tamlin his not only a dick but a racist one. Don’t scoff at me. I’m not sure if it’s just lazy writing or if Maas is just blinded by her own whiteness that she can’t see this is playing off the harmful stereotypes of the “mammy” role. In ACOMAF it gets even worse because when Feyre, her white-savior, tries to help out with chores and such, Alis won’t let her and other servants are described as bursting into tears when they see Feyre. Gross. *takes three more shots* Also straight.

Lucien: Tamlin’s BFF. Kind of. If you consider emotionally manipulating your bff’s to be a fun thing to do. Has one eye, red hair, is WHITE, and can be salty and sassy. He could’ve been a cool dude if he stopped hanging around Tamlin and putting up with his BS. One time, he almost let Feyre die, so that’s not cool either, but how does she repay him? By saving his life. Twice. Fun side note: did you know Lucien means light? So I’m guessing it’s a play on the character of Lumiere. *shotguns three beers* Also straight.

NOT. Okay, let’s take ten steps back. Feyre is like Belle. She has one defined characteristic for her (Belle likes to read, Feyre likes to paint). She can hunt and fight. But she generally is swept up and told what to do, not resisting much. I say generally because there are some moments where she fights back, but she is constantly shuffled around by men in her life and I personally don’t see that as being extremely feminist.

Tamlin’s certainly not feminist. His end goal is to get the spell broken and Rhysand is like Feyre, he falls somewhere in between. At least in ACOMAF he does. Here in ACOTAR he’s not feminist at all (remember that drugging/forcing Feyre to do things against her will incident?).

Furthermore, if you’ve read ACOMAF and feel the need to defend this plot point, I just hope you realize you are belittling every girl that has ever suffered through sexual assault or date-rape. I know quite a few girls who have experienced this, some of which who have gone through some real emotional trauma because of it, and let me tell you, they don’t run off and mate up with the guy who did it to them. This is a cheap plot point and bad writing at best, and normalizing date-rape behavior at worst.

Look, it’s white as hell, extremely hetero-normative (the spell specifically states for a human female, so the whole kingdom would be screwed if Tamlin hadn’t been attracted to females), it perpetuates racist stereotypes, and has more ellipses and m-dashes than you’ve ever seen in your entire life. The writing isn’t outstanding, and it has way too high of a rating on Goodreads (4.3 out of 5 stars? Really???) If you like the series, at least be open to critiquing it the way I have. No series is perfect. No book is perfect. Just recognize that.

I’d love to hear comments! But keep it clean and don’t be mean (to me or each other). Comments that slander me as a person will not be approved/posted, so unless you have constructive criticism, be gone demon.

Yes!! It’s done!! Thank you to everyone who helped along the way and congratulated me after I passed my defense. I’m still working out copyright issues with it right now, but I’ll keep you updated here, Twitter and Tumblr as to when it’s going to go live online! 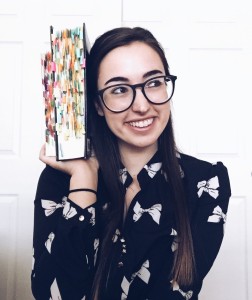 12 Replies to “Re-read/Re-review: A Court of Thorns and Roses by Sarah J. Maas”