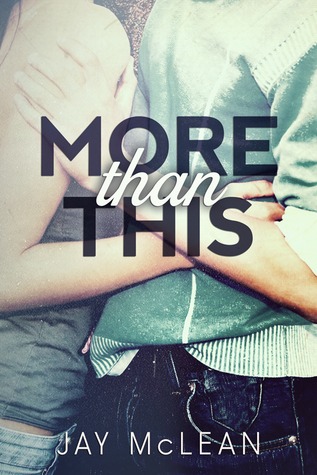 More Than This by Jay McLeanSeries: More Than #1Published by CreateSpace on August 20, 2013Genres: Contemporary, Romance, New Adult, NSFWPages: 318 : e-book editionSource: Purchased on AmazonAdd to Goodreads

When Mikayla imagined her prom night, she envisioned a fairy-tale evening full of romance. So when betrayal and tragedy come in quick succession, Mikayla is completely destroyed. Suddenly, everything she loved and everyone she relied on are tragically, irrevocably gone.

Jake, a handsome boy she just met, happens to witness her loss. With no one to turn to, Mikayla is forced to depend on this near stranger and his family, and he in turn is determined to take care of her. But Mikayla—thrust into adulthood with no one to guide her—is desperate to contain her grief and hide what she considers to be her weakness. Mikayla and Jake both want more, but despite their growing closeness and intense chemistry, she tries to keep her distance and protect her heart. As he does everything in his power to win her trust, Mikayla must choose between remaining alone and safe or letting love in.

Sam over at A History of Books had recommended Jay McLean to me about a month ago, but I was too busy to really dive in, so what’s a better time to try out a new series than when you should be writing 12-15 page papers!?

I AM the Queen (of procrastination).

Anyway, I dived in and basically didn’t resurface or think of anything else until I was finished and then I went back to Sam and begged her to loan me the rest of the one’s she had so I could keep reading the rest of the series.

Let’s start out with a fair warning though: I can see why a lot of people would not like this book. Like I said before, it’s FULL of sexy times, so if you’re not into that, this definitely is not for you. The plot is not necessarily predictable, but at times it’s so over the top and ridiculous that even I was like “come on seriously??”. There’s something about it though that really adds to the entire story and makes you insatiable for more. It’s probably the sexy times. I mean they basically had me like this:

Basically if you’re looking for something quick and dirty (quite literally) than this is the series/book for you. I’m just starting the next one and I can already tell it’s going to be just as good. This is probably going to go down as my second favorite series of the year, because, let’s face it, nothing can beat out Captive Prince at this point.

2 Replies to “Review: More Than This by Jay McLean”