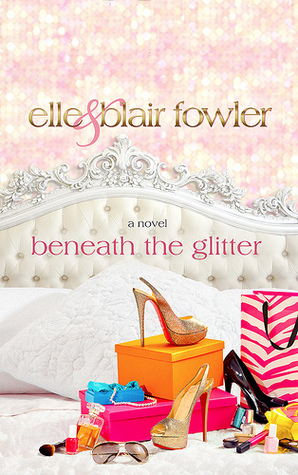 Synopsis: From internet stars Elle and Blair Fowler comes a scintillating new novel that takes readers Beneath the Glitter of the glitzy L.A. social scene.
Welcome to a place where dreams are made.  And where nothing—and no one—is ever what it seems.After their make-up and fashion videos went viral on YouTube, sisters Sophia and Ava London are thrust into the exclusive life of the Los Angeles elite.  Here fabulous parties, air kisses, paparazzi and hot guys all come with the scene. Sophia finds herself torn between a gorgeous bartender and a millionaire playboy, and Ava starts dating an A-list actor.  But as they’re about to discover, the life they’ve always dreamed of comes with a cost.Beneath the glitter of the Hollywood social scene lies a world of ruthless ambition, vicious gossip…and betrayal.  Someone close to them, someone they trust, is working in the shadows to bring the London sisters falling down. And once the betrayal is complete, Sophia and Ava find themselves knee-deep in a scandal that could take away everything they care about, including the one thing that matters most—each other.

My review: Normally when I read books like these I file them under my “guilty pleasure” category because that’s essentially what they are. These types of books don’t challenge you, it’s just light and fluffy reading. That being said, this reminded me a bit too much of a mix of Lauren Conrad’s L.A. Candy series with a bit of Zoey Dean’s A-List series mixed in.
I wish the book had focused a bit more on the sisters work to start their company London Calling and how difficult it is to get a company off the ground in Los Angeles. Instead it was just a lot of sister fighting and boys, boys, boys. Which is not necessarily bad, it’s just not what I expected from the synopsis.
Everything came to the girls too easily and I kept seeing Sophia and Ava London as Elle and Blair Fowler and how it seems that they have everything handed to them easily so that kind of put me off form liking the characters more than I should have.
I think the last few chapters really helped me like the book a lot more. Without them I would probably have not liked the book more. With those last chapters though it seemed like the girls (in real life) had gotten a handle on what type of story they wanted to write, so I’m hoping the next book will be better (which I will be reading as soon as it comes in at my library because I am curious to see what happens next).
Sometimes it was a bit predictable and sometimes the cattiness of the girls got a bit annoying, and it seemed like everyone kept having the same conversations or inner monologue but like I said before, that’s usually how these books are. On the other hand, Dalton? Swoon! I think he’s my favorite character because he actually has some sense and is not all caught up in this fabulous celebrity world that L.A. is.
Also, as someone who has grown up in L.A. and SoCal my whole life, I can assure you that L.A. is not as fabulous as they make it seem in these types of books. No, you do not see celebrities everywhere, and they do not immediately fall in love with you when you go to look at animals (I’m looking at you Ava!) You get the people like Dalton who are a bit more cynical, down to earth, and hard working. Just a thought for non-California natives. That also kind of put me off about the book because it was so fake, but sometimes it’s nice to pretend right? That’s what fiction is about.
Overall, I gave the book 3 stars because while it wasn’t the best guilty pleasure I’ve ever read it certainly isn’t the worst either and it did have some good redeeming qualities. To be honest, if Elle and Blair Fowler hadn’t written it I would have liked it a bit more, but then again it was because they wrote it I picked it up and wanted to see how well done or what a train wreck of a book it would be.