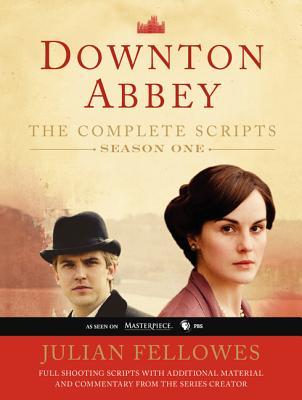 Synopsis: The full scripts of award-winning Downton Abbey, season one including previously unseen material
Downton Abbey has become an international phenomenon and the most successful British drama of our time. Created by Oscar-winning writer Julian Fellowes, the first season delighted viewers and critics alike with stellar performances, ravishing costumes, and a gripping plot. Set in a grand country house during the late Edwardian era, season one of Downton Abbey follows the lives of the Crawley family upstairs and their servants downstairs as they approach the announcement of the First World War. Fellowes succeeds in not only entertaining his audience with a combination of sustained storylines and sharp one-liners but also in delivering a social commentary of British life. The scripts from season one give readers the opportunity to read the work in more detail and to study the characters, pace, and themes in depth. With extended commentary from Fellowes, highlighting key historical or dramatic details, this book gives invaluable insight, particularly for would-be screenwriters, into how Fellowes researched and crafted the world of Downton Abbey.Featuring full-color photographs!

My review: As a lot of people may know (since I talk about it on Twitter a lot) I absolutely LOVE Downton Abbey so when I found out there was a couple books that had the complete scripts I just had to get my hands on them.

While these books have the complete scripts, including parts that were cut out from the show, there’s also tons of footnotes where Julian Fellowes talks about a variety of things like why certain parts were cut, his feelings on different scenes, and even research that was done for different scenes. I throughly enjoyed these footnotes because it gave you an even bigger and better back story to not only Downton Abbey but the filming and Julian Fellowes himself. You can clearly see he cares for his characters and how they are presented to the audiences.

This definitely made me want to go back and watch the whole first season over again but I’ve got to finish the fourth season first and above all I don’t have my Downton DVD’s with me here at school. Maybe something I can do over Spring Break…

I’m so excited to pick up the season two version of the scripts and want the third and fourth seasons to come out in print soon so I can read those as well! If you love Downton Abbey then you HAVE to pick these up!