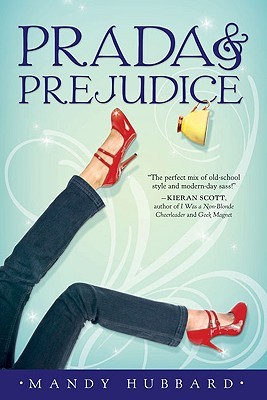 Synopsis: Fifteen-year-old Callie buys a pair of real Prada pumps to impress the cool crowd on a school trip to London. Goodbye, Callie the clumsy geek-girl, hello popularity! But before she knows what’s hit her, Callie wobbles, trips, conks her head…and wakes up in the year 1815!

She stumbles about until she meets the kind-hearted Emily, who takes Callie in, mistaking her for a long-lost friend. Sparks soon fly between Callie and Emily’s cousin, Alex, the maddeningly handsome – though totally arrogant – Duke of Harksbury. Too bad he seems to have something sinister up his ruffled sleeve…
From face-planting off velvet piano benches and hiding behind claw-foot couches to streaking through the estate halls wearing nothing but an itchy blanket, Callie’s curiosity about Alex creates all kinds of trouble.
But the grandfather clock is ticking on her 19th Century shenanigans. Can Callie save Emily from a dire engagement, win a kiss from Alex, and prove to herself that she’s more than just a loud-mouth klutz before her time there is up?
Release Date: June 11, 2009
Number of pages: 238

My review: This was such a cute story! I orginally thought it would have more to do with Pride and Prejudice but in actuality it just had elements of Jane Austen’s original story. For example, Callie often judges people too quickly and makes assumptions out of everyone around her. Alex is arrogant and seems to be a complete and total ass (especially when he essentially tells Callie that women are lesser people than men. Ugh what a pig) but he actually has good intentions and helps those around him, much like Darcy.
Ah, Darcy. Swoon..Ahem right, back to this story.
I really liked how Callie had SO much character development. At the start of the story she is a typical fifteen-year-old girl. She wants to be accepted by her peers and vies for their attention. Essentially this is how she goes about buying the Prada’s; to impress the “It Crowd” from her school. Silly girl.
But take away 200 years from a girl and she blossoms into a wonderful, comptent, woman who no longer cares for the popular girls and learns a lot of life lessons about loving and caring those around her. And to not judge people too quickly!
The ending upset me so much though because I thought it ended a bit too quick and left me with a cliffhanger! What happens!? It’s one of those endings where you kind of make your own decisions. I like how the elements of 1815 were put back into the 21st century however.
I really liked Callie’s internal dialogue to herself too. She’s so spunky and funny. I loved seeing how she dealt with different situations that the 1800’s brought up for her. An enjoyable character in my opinion.
Overall, I gave this one four out of five stars. It was a cute and fun read but it wasn’t my all-time favorite Pride and Prejudice spin-off. Pick this one up if you’re in between books!
No comments yet