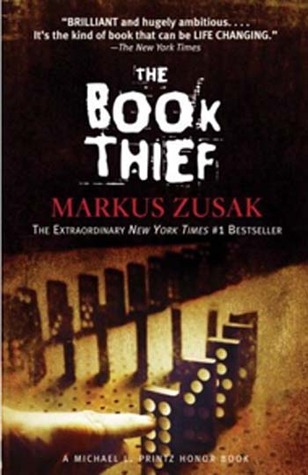 Synopsis: It’s just a small story really, about among other things: a girl, some words, an accordionist, some fanatical Germans, a Jewish fist-fighter, and quite a lot of thievery. . . .
Set during World War II in Germany, Markus Zusak’s groundbreaking new novel is the story of Liesel Meminger, a foster girl living outside of Munich. Liesel scratches out a meager existence for herself by stealing when she encounters something she can’t resist–books. With the help of her accordion-playing foster father, she learns to read and shares her stolen books with her neighbors during bombing raids as well as with the Jewish man hidden in her basement before he is marched to Dachau.This is an unforgettable story about the ability of books to feed the soul.

My review: I can’t believe I waited so long to read this! I’ve had it sitting on my shelf for quite some time and I always promised myself I would read it at Christmas (I don’t know why) and so this year I finally did it.

The Book Thief is such a deep story. Of course the narration is from the point of view of death, which while bringing a different perspective to the story, also adds an element of solemnness. Death doesn’t seem vengeful or mean, he seems tired of his job and sorry that he has to carry so many souls during World War II. He brings a somber tone to the story, which I think is good because if it had been from the point of view of Liesel, our main protagonist, it would have given the story more innocence, which would have ruined the overall feel.

As touchy of a subject that World War II can bring to some people, Markus Zusak has flawlessly written a tale which inspires hope and love for the written word. The Book Thief is one part sad and hopeless, and one part gleeful and triumphant. While Death tells the tale of Liesel, Liesel herself brings out a vivaciousness that has the readers rooting for her from the very start.

I enjoyed every aspect of The Book Thief (except maybe the ending which had me crying like a baby!) It takes on such a unique perspective and tells a tale, the likes of which had never been told before. Not only does The Book Thief reinforce how precious reading, books, and writing, can be, and how they can save us and give us an escape from reality, but The Book Thief also shows how resilient and strong some people can be in the face of devastation.

Of course now, I can’t wait to see the movie! And I can say hands down this is the best book I’ve read this year.

0 Replies to “The Book Thief by Markus Zusak”