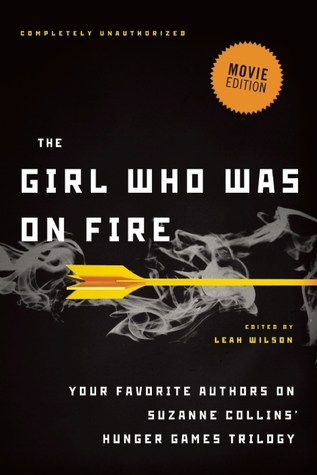 Synopsis: Includes 3 brand new essays on Gale, the Games, andMockingjay!
**Already read the first edition of The Girl Who Was on Fire? Look forThe Girl Who Was on Fire – Booster Pack in the Kindle store to get just the three new essays and the extra movie content.**Katniss Everdeen’s adventures may have come to an end, but her story continues to blaze in the hearts of millions worldwide.In The Girl Who Was on Fire – Movie Edition, sixteen YA authors take you back to the world of the Hunger Games with moving, dark, and funny pieces on Katniss, the Games, Gale and Peeta, reality TV, survival, and more. From the trilogy’s darker themes of violence and social control to fashion and weaponry, the collection’s exploration of the Hunger Games reveals exactly how rich, and how perilous, Panem, and the series, really is.• How does the way the Games affect the brain explain Haymitch’s drinking, Annie’s distraction, and Wiress’ speech problems?• What does the rebellion have in common with the War on Terror?• Why isn’t the answer to “Peeta or Gale?” as interesting as the question itself?• What should Panem have learned from the fates of other hedonistic societies throughout history—and what can we?CONTRIBUTORS: Jennifer Lynn Barnes, Mary Borsellino, Sarah Rees Brennan, Terri Clark, Bree Despain, Adrienne Kress, Sarah Darer Littman, Cara Lockwood, Elizabeth M. Rees, Carrie Ryan, Ned Vizzini, Lili Wilkinson, Blythe Woolston, Diana Peterfreund (NEW), Brent Hartinger (NEW), Jackson Pearce (NEW)

My review: Upon completion of The Hunger Games series, I have become obsessed with finding different companion novels and philosophy books that discuss different aspects of The Hunger Games. This was the perfect starting point to delve deeper into the series and look at different hidden meanings and get a variety of viewpoints on the series.

Everything from Gale vs. Peeta, to the idea of the Games and how they connect to our society, to scifi mutations were discussed and it was incredibly interesting. I liked reading all the different authors opinions and ideas about different things in the series and I found myself either agreeing with them and seeing the series in a different light or disagreeing and coming up with my own arguments.

I definitely think this is one of those books you shouldn’t read all at once though. There was a few times towards the middle of the book where I thought the essays were a little repetitive but towards the end they began to differ a bit more and the book got more interesting. This is something that you could pick up from time to time and read while you’re in the middle of another book, to give yourself a breather.

Overall, I thought it was extremely interesting and I can’t wait to pick up a few more books like this because they really get you thinking about everything that is beneath the surface of The Hunger Games series. I completely recommend this for all the die-hard fans out there.