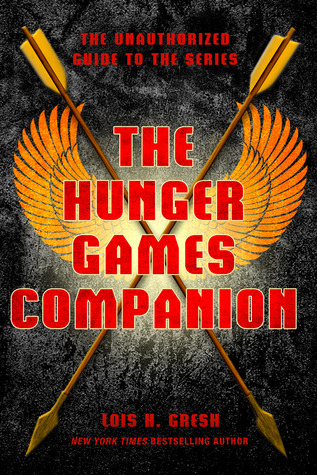 Synopsis: The ultimate companion guide to the blockbuster Hunger Games trilogy.
For all those who adore Katniss and Peeta, and can’t get enough of The Hunger Games, this companion guide to the wildly popular Hunger Games series is a must-read and a terrific gift.Go deeper into the post-apocalyptic world created by Suzanne Collins than you ever thought possible: an alternative future where boys and girls are chosen from twelve districts to compete in The Hunger Games, a televised fight-to-the-death. When sixteen-year-old Katniss learns that her little sister has been chosen, she steps up to fight in her place and the games begin.The Hunger Games Companion takes readers behind the scenes and includes fascinating background facts about the action in all three books, a revealing biography of the author, and amazing insights into the series’ main themes and features – from the nature of evil, to weaponry and rebellions, to surviving the end of the world. It’s everything fans have been hungering for since the very first book!This book is not authorized by Suzanne Collins, Scholastic Press or anyone involved in the Hunger Games movie.

My review: Comparing this book to The Girl Who Was on Fire: Your Favorite Authors on Suzanne Collins’ Hunger Games Trilogy, this book was far more scientific based while the other one was more of a collection of opinions and theories about characters and other elements of the story.

I liked that the two were very different. It allowed me to see two different sides of The Hunger Games series. While some of the scientific parts here did get me a little bored, I liked how the world of the Games was connected to our real life to show that maybe some elements weren’t as far into the future as we think. I also liked how at the end of each chapter there were “Dooms Day Predictions,” I thought those were really funny to read.

I also liked the use of graphs and charts throughout the book. It kind of broke up the more dull moments and gave you a break from some of the heavier stuff. I could really tell that the author did her research and this was a very thorough companion guide (Plus it’s only like $5 on Amazon!)

Of course, if you love the Hunger Games series you should check this out. This is the second companion novel I’ve read for the series and I’m really appreciating the breadth of topics each one has conquered so far. I can’t wait to pick up a few more!